When to Use Hard Medium and Low Firing Enamels

A question came up today about when to use hard, medium, and low firing enamels.

Hard firing enamels are fired at a higher temperature as in the 1500’s degree range or longer in the kiln.

Medium firing enamels I think of using in 1400’s degree range, or at higher temp as 1500 degrees, but less time.

The purpose of all this is to balance two things.

First the  expansion of the metal being used.

Second your technique being used.

Starting  with copper as it is used most commonly in enamels.

Copper oxidizes the fastest of the metals we use in enameling. We balance this by using medium firing enamels so they melt or fuse before the copper has time to oxide. And using higher temperatures. If it oxidizes the enamel is likely to flake off or just discolor, but many enameling on copper use the oxidation to get some beautiful colors.

Another way to balance this is to use finer grit of enamel. The finer grit will fuse quicker than a larger grit of enamel without allowing oxygen to get to the copper. Without oxidation the enamelist  achieves that beautiful gold or stunning golden orange copper color.

It is best to know the fusing points of all your enamels not only so you know which ones to apply as a base coat of enamel known as flux, which should be the hardest enamel, to avoid the lower layer to rise above the secondary layers as seen below.

Above the flux was a lower firing enamel than the top coats. So as the top layers melted the flux rose up along the edges and the top layer of enamel puddled in the center. 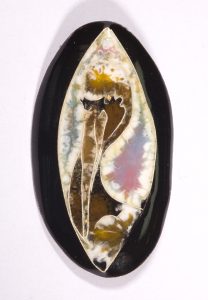 In this next image flux coat of enamel was not hard enough to prevent the following layers of enamel  from touching the sliver. And the brownish color of enamel is burning.

Along the wall of the fine silver cloison wires I will put a fine line of blue to keep any warm color from burning.

Enamel burning along the cloison wires.

“I’m torch-firing, I always have my work in my sight so I just watch for signs of melting, which happens very fast.  I’ve had “pull through” with Titanium White.  Titanium White really reacts nicely with copper and you can get some really lovely, but unpredictable, effects.  With a little over firing the enamel turns a beautiful rust color and in spots will be green.”

Yes these effects can be used to your advantage, this is the oxidation of the copper coming through. And in torch firing I realize you are not going by temperature and have the advantage of seeing all that is happening.

Enameling on copper, as in painting enamel  in this piece,

When you need hard firing enamels

It is necessary to use a hard firing enamel = flux as it will be fired many times and I do not want the painting to disappear into the base coat of flux. Also in repeated firings the copper can still oxidize through the enamel and show a color change after many firings.  As I paint my image I need the painting enamel to adhere to the base coat of flux by firing the piece, then I can continue layering my painting with enamel colors (soft firing enamel) that fire at a lower temperature or less time. The domed metal add strength or less expansion. So it can handle a harder firing enamel without so much expansion or movement in the enamel. If the base coat was a lower firing enamel it would become soft enough in firing the image would distort as the enamel base or flux would move before the image enamels fuse. Painting enamels are a soft or low firing enamel= as they are ground to a face powder grit.

The enamel dot fourth from the left is still grainy after all the rest are fused. If you have three enamel on a plate, one hard firing, one medium firing, one low firing and fire the plate once, you will see they melt at different speeds.

If you want to use them all in one project just remember the hard is on the bottom then the medium and then the low firing enamel. This is also why you can use unleaded with leaded enamels as long as you put the unleaded on the bottom as it is a high fire enamel.